How can the Muslim community contribute to accelerating GDP India?


The Muslim community can contribute a lot to accelerating GDP in India. Modi 2.0 has a clear goal to raise Indian GDP to $5 trillion by 2024. Further, Piyush Goyal, in his interim budget speech, categorically stated an aim to be a $10 trillion economy by 2032. BJP manifesto for Lok Sabha election 2019, also, has echoed the same with a roadmap and reform plans. So, India can be the 4th largest economy in the world by 2024. It needs accelerating Indian GDP growth rate by 2 to 3 percent. Now the question is how the Muslim community can contribute to accelerating GDP India?

Economic facts about the Muslim community


It is a well-known fact that the per capita income of the Muslim community in India is much lesser than the national average. A national survey based on the 2001 census revealed two major reasons.

Despite the fact that Muslims are more urbanized than the Hindus, per capita income of the community remains lower than the national average. The reason behind is that the community members are engaged in lower-income jobs. We see, only a few Muslims in top jobs. As Hamid Ansari, the then Vice-President of India told that only 3 percent of Muslims are working as directors or CEOs of top Indian corporations. We, hardly, find Muslims among top industrialists. Azim Premji may be an exception.

The Muslim population has poor education, by and large. Most of them are engaged in traditional craftsmanship or in a labor-intensive job. These are the major causes of their poverty. Hence, the community is contributing less to GDP India compared to the population. There is a need for the economic upliftment of the Muslim community in order to accelerate GDP growth in India.

Narendra Modi on the Muslim community

Prime Minister Narendra Modi believes in "Sabka sath, sabka vikas, Sabka vishwas". Muslims are not an exception. However, a socio-political change is required within the community. Modi has rightly said that he wants a Quran in a hand and a computer in another for Muslim students. This sentence advocates technical education for Muslim students besides religious education to raise their income.

Modi government, in its first term, emphasized on women empowerment of the Muslim community. Triple Talaq bill is just an example that is opposed by the most opposition parties who surrendered to the orthodox religious leadership. Modi 2.0, again, is trying to table the bill and get it passed. Women empowerment can significantly change both the social and economic scenario of the community.

Driving India to a $5 Trillion and $10 Trillion Economy

What can India learn from the US, China, and Japan to raise its GDP to $5 Trillion?


Six largest economies in the world

India can jump to the 4th largest economy in the world in this Narendra Modi regime. It will take only five years to be the 4th largest economy beating the UK and Germany. At present, the US tops the list with a nominal GDP (2019 prediction) of $21,5 Trillion followed by China with a GDP $14.25 T. Japan is third in the list which has a GDP of $5.23 T followed by Germany, the fourth largest economy. Germany has a GDP of US $ 4.2 T. Surely, India will jump from its sixth rank to the fifth surpassing the UK that has a GDP of $ 2.98 Trillion. India's GDP is calculated at $2.93 T (2019) when Narendra Modi is voted to be the Prime Minister of India for the second term.


What it takes to the 4th largest economy

India can be the 4th largest economy in the world in nominal GDP in this Modi regime. Gone are the days when we were talking of the sixth or fifth largest economies. To reach to the present GDP of Germany, India needs to add $1.27 T (Germany 4.20-2.93 India) to its GDP. Presently, the growth rate in Germany is about 1.8 percent. In 2024, German GDP will be about $4.58 T, calculating with the present growth rate. Hence, India has to add $1.65 T in its GDP to reach that of Germany. Indian people have elected Narendra Modi for a term of five years, i.e. up to 2024.

Roughly, India needs to grow by 55% in the Narendra Modi regime to reach the GDP of Germany, the fourth largest economy in the world. If India grows by 9.1%, with a cumulative effect, it will reach the target by 2024. India's growth history is estimated between 7 to 7.5 percent. So, we have to accelerate our growth rate by about 2 percent to beat Germany in nominal GDP.

How to achieve GDP growth of more than 9%

Increasing a growth rate by two percent is not an easy task. However, Narendra Modi can achieve it. "मोदी है तो मुमकिन है"- it is possible if there is Modi. He has proved it again and again after getting a triumphing majority over congress in 2014. We know that he can do miracles by his intelligence, planning and hard work. Just after winning the Loksabha polls, he has declared that he would honestly work hard for the country. He also promised upliftment of lifestyles of 1.3 billion Indians.

How can it be done in this Modi regime?

Already, Modi 1 (2014-2019) has paved the path for solid growth. He has done a lot, reformed a lot to bring the economy on track. Narendra Modi has a vision and a zero tolerance to corruption. Already, demonetization, GST, digitization, direct benefit transfer, and several other measures have decreased corruption. Surely, these reforms have laid a solid foundation for economic growth. Skill development and Make in India campaign are, certainly, the add ons.

Read also: Driving India to a $5 Trillion and $10 Trillion Economy: Modernization and Digitization

Most of the Indians are dependent on agriculture. Hence, growth in the long-ignored agriculture sector will push the economy up. We know that Modi has already taken several long term steps to reform Indian agriculture. Now, the time clock has stuck to accelerate reforms. Earlier, Modi has announced to double the farmer's income by 2022. Wait, we will see something great by that time.

Besides increasing the MSP, development in the irrigation system will certainly add to their income. Moreover, the introduction of new technologies can do miracles. India can learn from Israel and implement some of their methods. The rural education system may also include agriculture in its curriculum. There is an endless list of reforms and developments in the agriculture sector. Increase in farmer's income will also boost consumer market. In turn, it will further accelerate GDP growth.

High growth in the manufacturing sector is a must for accelerating GDP growth. With "Make in India", a flagship program of Modi 1, India has already taken steps towards. The trade war between the US and China has opened the door of new opportunities. If handled properly, this can work as a catalyst in the growth of the manufacturing sector.

Modi government has already promised a 100 lakh crore investment in infrastructure in the coming five years. We can expect more railways, highways, waterways, ports, airports, and of course iWays. in addition, stability in the political and economic scenario will attract more investments, both domestic and international.

India has jumped several ranks in the index of ease of doing business, and more reforms expected. The country has been creating an entrepreneur-friendly environment. More and more startups are joining the league. Moreover, Skill India will provide a skilled workforce.  As a result, Acceleration in the growth in the manufacturing sector is obvious.

The strength behind topping the GDP list for America is the service sector. Hence, accelerating growth in the tertiary sector is absolutely necessary. Here, India has huge potential. Let us take an example. Despite large numbers of tourist spots- palaces and forts, temples and monasteries, forests and sanctuaries, mountains and rivers; India is failed to attract tourists that it deserves. Also, developing spiritual tourism a great way. We expect a manyfold increase in the number of tourists with a developed infrastructure and skilled manpower in the hospitality industry.

Similarly, India has a large workforce, ready for white collar jobs. On the other hand, India is a preferred destination for offshore outsourcing. Now, it is time to milk the potential. BPO, KPO, medical transcription, app development, blockchain technology, the list goes long, where we can do far better. However, India has to perform better in the human capital index to go long in service sectors.

Banking and finance is also a huge industry. Recently, we have seen acquisitions and mergers in the banking sector. This will enhance the capabilities of Indian banks. Adaption with new technologies will certainly increase the potential of growth in this sector.

We believe, Modi government has a plan and will implement during Modi 2 to accelerate growth in the service sector.

We know that most of the Muslim population are in blue collar jobs, either skilled or semi-skilled. They work in various workshops or run their own small shops. Most of them are good craftsmen and artisans, masonries, etc. Also, they work hard. However, most of them are uneducated or under-educated. Hence, they need special attention. Bringing more of them to Skill India program can increase their technical expertise. Additionally, it will add to their income. A detailed article is there about the topic that you may like to read.

What can Narendra Modi do for the Muslim community in India?

I will quote again: "मोदी है तो मुमकिन है"- it is possible if there is Modi. There are a few suggestions for exploring the possibilities and potentials. The country has numerous numbers of inherent possibilities. And we have to dig deep to reach our target. Let us devote ourselves to accelerate the GDP growth, at least by two percent.  A nine percent growth will take us to our target by 2024. So, be hopeful and work hard with Narendra Modi to jump to the fourth largest economy in the world beating the UK and Germany by 2014. Modi has five years from now and we too.

Read Also: What can India learn from the US, China, and Japan to raise its GDP to $5 Trillion?

The Confederation of All India Traders (CAIT) Secretary General Praveen Khandelwal while complimenting the Modi and Bharatiya Janata Party (BJP) president Amit Shah said that traders have played a major role in the victory of the BJP as 7 crore traders across the country along with their employees consolidated a vote bank in support of the party and its allies. Read more 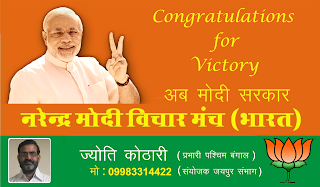 Jyoti
Jyoti Kothari is proprietor, Vardhaman Gems, a leading Gem and Jewelry manufacturers and traders having Head office in Jaipur and operating in Hyderabad, Kolkata and Mumbai. Vardhaman Gems (http://vardhamangems.com) have global client base. Business and franchisee inquiries solicited. He is senior adviser to Vardhaman Infotech (www.vardhamaninfotech.com/), a mobile applications and eCommerce website development firm in Jaipur. Jyoti Kothari is also a Quality Management System (ISO 9000) Trainer, Consultant and Lead Auditor. He is Educationist, writer, Social worker and Philanthropist.